Thirdhand smoke – What does the research say?

TRDRP funding on thirdhand smoke (THS) research has revealed potential human health risks due to exposure in smoked indoor settings. The U.S. Department of Housing and Urban Development (HUD) relied heavily on TRDRP-funded research to initiate its effort on THS in low income housing. This research has also supported passage of “no smoking in family child care homes” law in California in 2014.

—  TRDRP-funded research recently influenced the U.S. Department of Housing and Urban Development (HUD) to invest resources in investigating the potential health impact of exposure to thirdhand smoke (THS) and developing cleaning techniques to reduce THS residues from surfaces in homes.

—  TRDRP-funded THS research contributed to the passage of California legislative bill AB 1819 in 2014 that prohibits smoking tobacco at all times in the homes of licensed family child care homes and in areas where children are present.

Consistent with the program’s focus on emerging and under-researched areas, TRDRP has invested significant funding in THS research since 2010. A statewide research consortium of eight research groups is working in an interdisciplinary manner to unravel THS characteristics and potential risks to human health.

Below are some key thirdhand smoke research findings supported by TRDRP:

As data on the risk to human health of THS continues to be developed, this information serves as additional evidence for promoting smoke-free homes in low-income communities as well as a another reason to quit smoking. 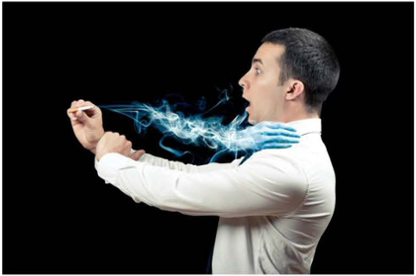